Millions of Girl Scouts — both former and present — are encouraged to wear pearls this week to honor the 100th anniversary of founder Juliette “Daisy” Gordon Low’s selfless act of generosity that allowed the organization to survive and prosper.

In 1915, only three years after its inception, the growing organization was in desperate need of funds. To support the movement for another year, Low sold her dearly loved natural pearls — a wedding present from her husband — for $8,000.

A photo portrait of Low featured on a Girl Scout regional website shows the founder wearing what appears to be a 30-inch-long rope of matched natural pearls. These could very well be the pearls she used to finance her organization. According to various sources, Low dedicated almost all of her personal assets to pay for the expenses of the movement.

The magnitude of her sacrifice comes into clearer focus when one translates what $8,000 would be worth in today’s dollars. The answer is a staggering $185,989.

We can fairly assume that her pearls were natural because the patent for the process of culturing pearls would be granted to Japan’s Tokichi Nishikawa one year later, in 1916. 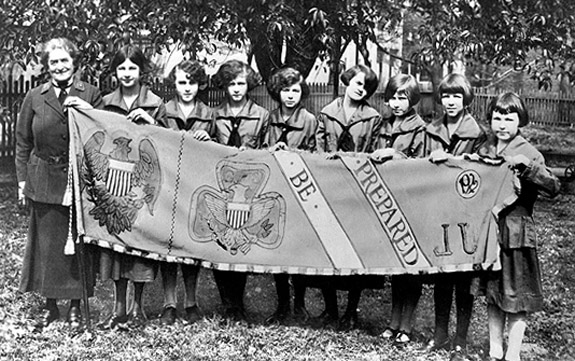 On March 12, 1912, 18 girls from Savannah, Ga., gathered for what would be the first meeting of Girl Scouts (then called the Girl Guides). Under Low’s leadership, the Girl Guides were incorporated as Girl Scouts, Inc., in 1915, and rapidly grew to include 10,000 girls in 328 cities by 1916, according to The New York Times.

Now in its 103rd year, the organization claims that more than 59 million American women have been part of Girl Scouting at some point in their lives.

Many young scouts will be receiving faux pearl necklaces during Girl Scout Week, which runs through March 14. The pearl gifts are intended to inspire the girls to continue Low’s legacy by “giving back” through service projects.